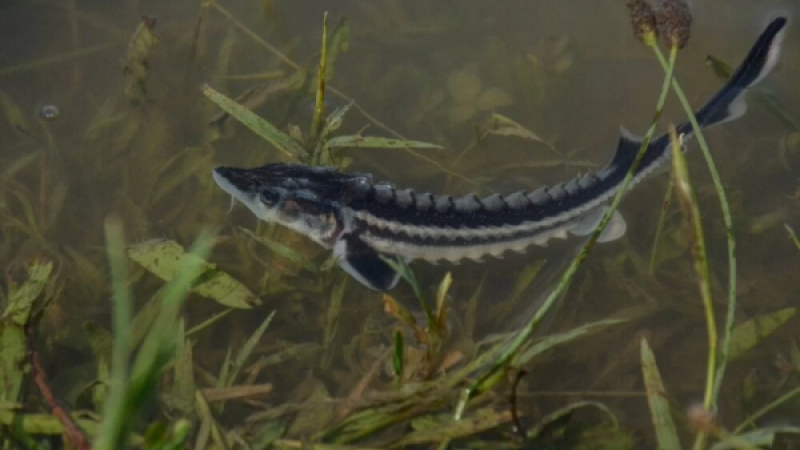 The disappearing rulers of the Danube

In the Lower Danube, on the border between Bulgaria and Romania, the last surviving wild sturgeon populations in Europe, breeding in a natural environment, have been preserved. Managing to survive in the last 200 million years, today these amazing creatures are threatened with extinction. Despite hunting bans in countries in the region, poaching is thriving. According to the latest WWF research from 2021, wild sturgeon meat and caviar are sold freely on the Bulgarian market and the number of confiscated illegally used fishing gear is increasing.

Why are the wild sturgeons disappearing?

Currently, there is a complete ban on catching and selling wild sturgeon from the Danube and the Black Sea. However, adult specimens still fall prey to poachers because of the high price of their caviar on the black market. Between the autumn 2016 and the summer 2020, a WWF team collected 145 samples from commercial nets in Bulgaria, Romania, Serbia and Ukraine. After being subjected to isotopic and DNA analysis in a German laboratory, it became clear that a third of them had been put on the market illegally. Out of 32 samples taken from Bulgaria, 6 were sold illegally and 4 were of a proven wild origin. The actual levels of illegal trade and catch of sturgeon are feared to be many times higher than those recorded.

„The reasons for the disappearance of sturgeons are complex, but certainly poaching and illegal trade with caviar are among the most serious threats to the species. In order to catch sturgeons, poachers use long ropes with hooks and weights, which they place on the bottom of the Danube - they are called "karmatsi" and are prohibited for use. However, the data shows that in 2020 alone, 260 such ropes were removed from the river – the most out of any year since 2016. The total length of all karmatsi caught during that period from the Bulgarian part of the Danube is over 23 kilometers," commented Ekaterina Voynova, senior expert in "Protection of Species" at WWF.

What does the WWF do to preserve the wild sturgeons?

Wild sturgeons are a solid indicator of the ecological state of aquatic ecosystems and are an irreplaceable part of them, as they live long, reach sexual maturity late and use a variety of habitats. At the same time, the International Union for Conservation of Nature (IUCN) classifies them as the most endangered group of species in the world. That's why the WWF works hard to protect their natural habitats. Over the past seven years, the nature protection organization's team has released more than 77 thousand tagged chigas, Russian sturgeons and beluga sturgeons into the waters of the Danube near Vetren, Lom and Belene.

Specialists carried out a one-of-a-kind rescue operation, along with inspectors from the Fisheries and Aquaculture Executive Agency, after a poaching in 2019, providing first-aid to a pregnant beluga sturgeon and returning it to the river. In addition, ichthyologists work actively in the field with local fishing communities in order to protect the sturgeon populations in the Danube and the Black Sea. Experts support the institutions in the fight against poaching, smuggling and illegal trade, by conducting studies and specialized training of the staff. In order to facilitate the activities of the controlling authorities, they have also created a number of manuals.